Since I don’t like styling my hair myself most of the time, and I’m super lazy when it comes to trimming and caring for my hair, the buck stops at scissors for me. I’ve definitely trimmed my hair before, especially when I wore it straight. Now that it’s curly, it’s been a struggle even figuring out when I actually need a trim.

When I did need a trim, I would travel to the local Sallys or Beauty Supplier closest to me and buy the slim, short, silver hair trimmers. They looked exactly like what my hairstylist used back in the day, so I figured they were the only way. I never even knew there was more than one form of trimmers.

There are so many hair trimmers out there that will clip your split ends. You don’t have to use traditional scissors. In fact, you don’t have to use scissors at all! The best way to trim your hair once you’ve landed on a pair of quality trimmers is to make sure your hair is straight. This way, your trim will be even all around.

You may need a few additional products that we will discuss a bit later. These items will protect your hair from damage. There are so many trimmers to choose from, so I put together the best ones that will trim your hair painlessly and will last.

Scissors most definitely make your hair grow back smoother versus electric trimmers that may or may not damage your hair.

In this guide, I will discuss both scissors and trimmers, just to keep the perspective and to allow you to decide which is best for your hair. Let’s start with clippers versus trimmers.

You can totally use regular scissors to cut your hair. Yes, the ones you cut paper with. I’ve also done this in the past because I like to experiment. Don’t try this at home, but I literally cut bluntly across and started to clip the insides of the piece that I just cut so that it doesn’t stay in the blunt style. I would do this all over my hair.

My results were shockingly decent, and it helped my hair grow. It’s not recommended that you cut your split ends by using regular scissors unless they are really sharp. Always make sure you use hair scissors.

Hair scissors themselves come in all sizes and materials.

Yes, materials matter too. Japanese steel scissors are one of the top-of-the-line options when it comes to trimming your split ends. They are very expensive, ranging from $50 to $100 plus for 1 pair! I found a pair on buybarber.com for $55.

Aside from the more expensive sheers, you can use a Sally Beauty supply pair for as little as $9.98. These are the smaller ones that I used when I thought I knew what I was doing. Sally also has a more expensive pair that’s still affordable at $27.49. 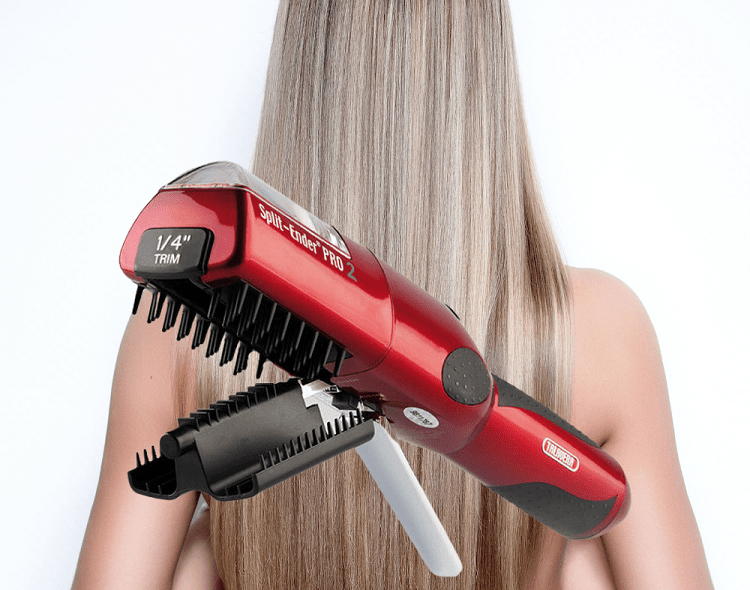 Let’s talk about the motorized style of trimmers that act more like a machine that will gather your split ends for you. The Split Ender Pro 2 is a 4-star trimmer that plugs into an outlet for charging.

You’ll charge it for 5 hours, and it will gather all of your split ends as you use it, strand-by-strand. You’re supposed to wash and dry your hair before you use it. You’ll want to make sure you brush your hair or straighten it first, especially if you have curly hair. It looks sort of like a blow dryer or flat iron, but there is no heating factor at all.

The Split Ender Pro has over 1900 reviews on Amazon, with most of them being 5 stars, so I think this one is pretty safe to try. Unlike the scissors, this process is quicker, but with all things has some drawbacks.

Pros of the Split Ender Pro 2

Cons of the Split Ender Pro 2

Sharper Image also has a split end trimmer. This is a cordless trimmer with a 1/4 inch trim. It’s a little less expensive than the Split Ender Pro 2, but it functions similarly. It also has a cover that will keep the hair from falling everywhere.

The only difference I see with this model than the Split Ender Pro 2 is that it cuts a smaller amount of hair. This model looks as if it slightly shaves the split ends, just enough to clip a super small amount, compared to the other.

In each video of the products, I noticed that the Sharper Image dumped the hair, and it looked fuzzier than anything. The other video showed the hair being trimmed in longer strands, which I think may concern someone who really just wants a slight trim.

During my search, I wanted to figure out who had the most affordable trimmers, as well. $100 + is a lot to spend on a styling tool, but I know if there is any way to save money, you don’t necessarily want to go super cheap.

However, for a hair trimmer, I think it’s worth a shot. After all, I feel like all of the split ends can be trimmed manually using scissors. I don’t think there’s a need for fancy gadgets, but that’s just the practicality in me.

Nonetheless, I found another one on Amazon, that’s right under $100, coming in at $79.99. The Split Ender Mini is a little different from the Split Ender Pro, in that it runs off AAA batteries and of course, is smaller. This has a 3.7-star rating, with most of the reviews being 5 stars, stating the product left their hair feeling smooth and soft. 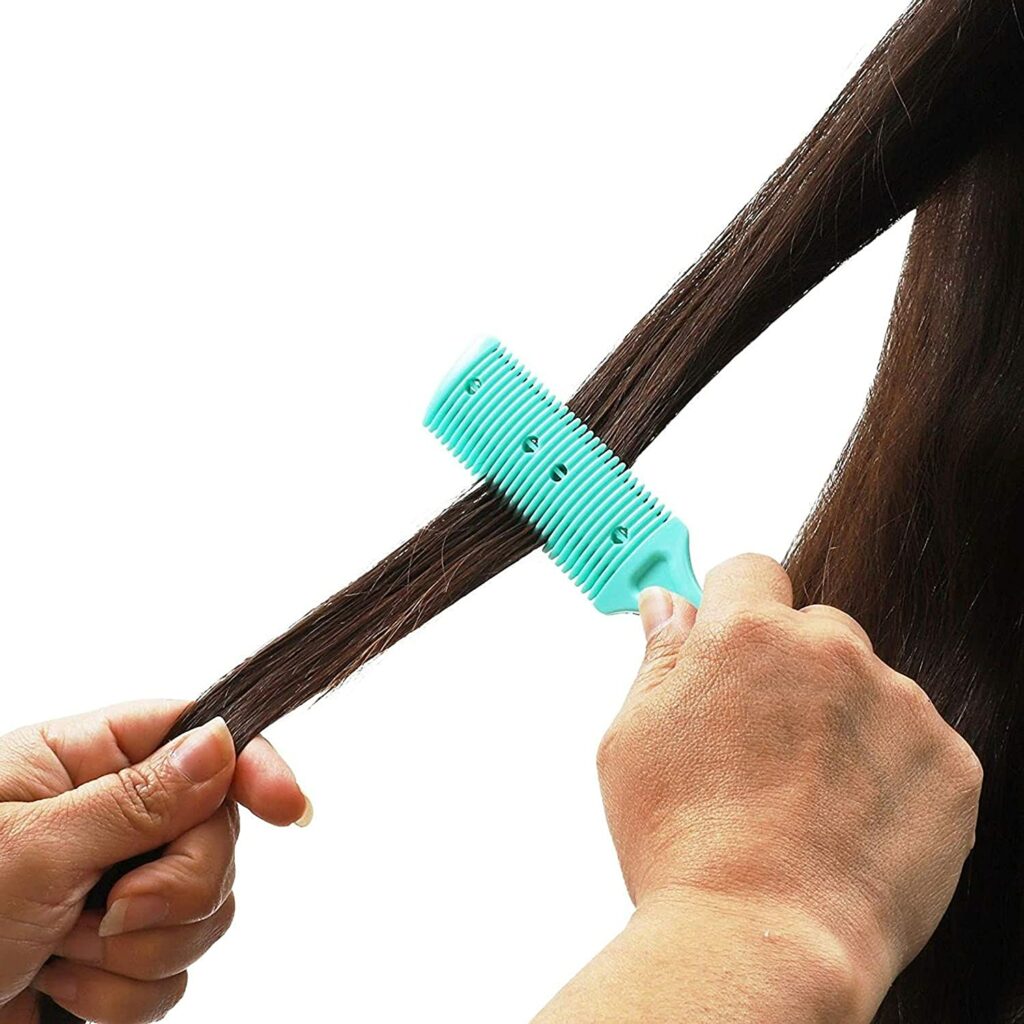 If you want a super affordable trimmer, you can try handheld manual trimmers. Now, take into consideration that these are very small job trimmers.

They probably won’t cut as precisely or as much as the other trimmers. The hair cutter comb, for instance, isn’t electric. Instead, it has a blade between a comb that you can run through your hair, and it will have the same effect.

Pros of Using the Comb Versus the Electric Trimmers

Cons of Using the Comb Versus Electric Trimmers

Although this may be the cheapest option, coming in at $6.99, it actually has better reviews than all of the trimmers combined!

The comb also comes with extra blades so that you can change them. This is also another dangerous aspect of the bladed comb. I know I would steer clear of blades, although the process is super simple for slipping your blades in and out, which is done at the top of the comb.

I think this comb is great for on-the-go, as well. You may not be able to take it to the airport, but for a quick change or getting ready at a girlfriend’s house before a night out, I feel like you can totally take this with you!

Now, this last trimmer is the only other that I found that’s on the more affordable side. This one has few reviews, but it serves as a split-end trimmer, and it can be used as a razor. It has several settings where you can adjust the length of the comb.

The comb can be used to shave, sort of like the comb that I previously mentioned. The blade is more discrete in this model. So, in this case, it works as you comb, which I think is very convenient. It does look like it’s the easiest to break since it’s made mostly of plastic. The price is $11.67 and can be found on Walmart.com.

I do like that the shaver also has more of a straight razor. This way, you can shave your neck hair as well so that you’ll have an overall clean look. This is the last resort, but I don’t think it should be taken off the trimmer table just because it doesn’t look as appealing.

I would say this trimmer can be used as an emergency trimmer or, like the previously mentioned trimmer, for on-the-go use. Or, if you need a quick gadget, you can keep it in your bathroom drawer strictly for convenience.

Pros of the Manual Comb

Cons of the Manual Comb

The not good for thick hair is one of the best points that I can make. I have thick hair, and that’s sometimes the issue with all styling tools that I try.

I always see the “it’s so easy” Youtube videos, and this particular product reminds me of situations like this. You’ll get the product and try to use it the same way it’s advertised, but low and behold, you end up breaking it or getting lackluster results.

I like the fact that they are multi-purpose and can trim your split ends and give you a clean shave overall. It’s more of a salon experience, in my opinion. I guess I take into consideration the weight of the product that comes in at 0.11 pounds. It seems pretty flimsy and easy to break if you mishandle it in the slightest.

On another note, the stainless steel blades do add quality to the product. Stainless steel is long-lasting and is a great way to go when it comes to metals. Some of my jewelry pieces have been stainless steel since the metal won’t turn easily or quickly rust.

When I first sought out to find the best trimmers, I wasn’t sold on using a trimmer in general. I would think the old-school way of cutting your split ends with scissors is best. However, I can understand why an electric or manual split end trimmer would be necessary.

Why Trimmers are Better than Traditional Scissors 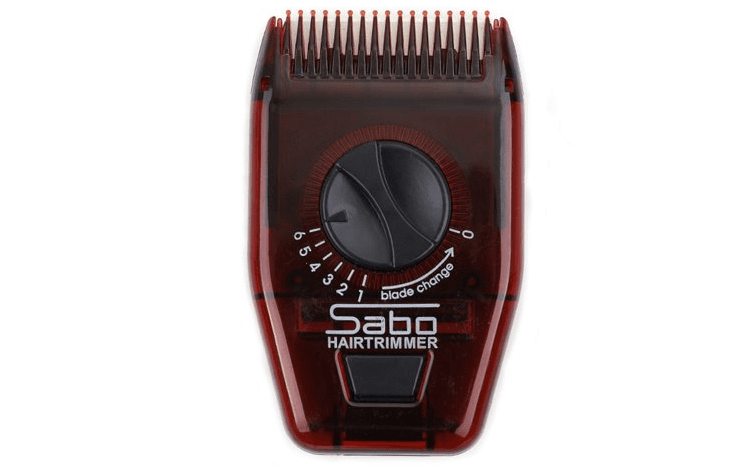 Once you land on a great trimmer, I think it’s important to care for them as long as you can so that you’re able to keep them longer.

Caring for Your Trimmers

Question: How Do You Use a Split-end Trimmer?

Answer: You use split-end trimmers by washing and drying your hair. Brush out the strands and straighten your hair. If you need to, Choose a small section of hair and clamp the hair, the same way you do when you use a curling iron or flat iron. Run the trimmers down each small section of your hair,  from a little below the root to the ends.
If you’re using a comb and not the electronic trimmer, you will pick up a piece of your hair again, in the same way you curl or straighten your hair. This time, run the comb through your hair slowly.

Question: How Much Does a Split End Trimmer Cost?

Answer: Split end trimmers average about $120. You can find the cheapest manual comb-style trimmer for as low as $6.99 on Amazon and an electronic trimmer for as high as $169 with the Split Ender Pro.

Question: What is the Difference Between Hair Trimmers and Clippers?

This speaks volumes since I’m sure they were looking for a product that best matches their quality to send when they couldn’t ship theirs. Since the Split Ender Pro 2 is the newer version, I think the upgraded features will make for a better product overall.

Split end trimmers are more of a newer phenomenon since they’ve migrated from the traditional scissor cuts. They allow individuals to get salon-quality hair care without paying the salon prices. 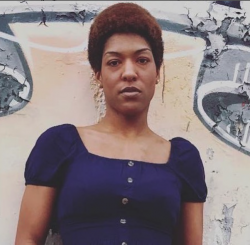 Jessica Ross
Haircare Hack Master at Hair Kempt
Jessica loves finding tips, tricks, and hacks that have been lost in time. She wants to help you achieve beautiful, strong, and healthy hair with the best information out there! She's always trying new tips to see if they work or not!

Welcome to Hair Kempt! I'm Alizabeth Swain. I've dyed my hair every single color you can imagine and gathered up this team of Cosmetologists, home hair care testers, and hair trend spotters who love to share the products we ACTUALLY USE, test, and try in our salons and at home! Our promise to you -- we won't recommend something we haven't actually tried and love! Find out more About Us here...